THE KIDS WHO WE ARE FOR – INCLUSIVITY, RESILIENCE AND SELF-REGULATION

25 Oct THE KIDS WHO WE ARE FOR – INCLUSIVITY, RESILIENCE AND SELF-REGULATION

Posted at 22:35h in Uncategorized by novoadmin 0 Comments
0 Likes 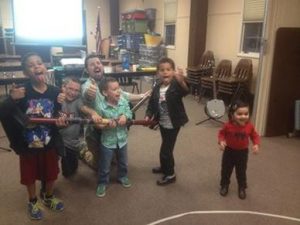 THE KIDS WHO WE ARE FOR – INCLUSIVITY, RESILIENCE AND SELF-REGULATION

Turtle Dance Music works with “normally” or “typically” developing students and students with an autism spectrum disorder. When I was a kid, a doctor diagnosed me with attention deficit disorder or A.D.D. I took Ritalin and Aderol for my symptoms because I was very wild. I had a lot of trouble paying attention in class and I had a lot of behavioral issues. Teachers and adults yelled at me on a regular basis and it always made me feel very sad and frustrated. When I work with typically developing kids or kids with an autism spectrum disorder, I totally understand them when behaviorally they act out, or when they do something innapropriate or when they get upset. I was that kid when I was younger. I threw tantrums, I bit the doctor after she chased me around the entire doctor’s office when she tried to give me a shot (I HATED the thumb prick when I was a kid), and I did a lot of things that most people would consider socially innapropriate. And I felt really bad when people yelled at me as a kid. I felt really misunderstood. I wanted to have friends. I wanted to have connections, but I felt very isolated and like I didn’t understand why the adult or grown-up was yelling at me.

When I work with kids today I always think about this. I work with both “normally” or “typically” developing kids and with kids with an autism spectrum disorder. I want students to recognize how to control their emotions, their behaviors and how to self-regulate. I want to create a safe space where if kids act out that is okay. You can take that energy and plug it into something that’s positive and productive. They are in a safe space and they are in the process of experimenting and learning what is right and what is wrong. An important aspect of child development is that kids need to be able to experiment through play. Kids learn through play. They need to try out things, in a safe space, and see what works and what doesn’t work. I also want kids to feel included. When I was a kid, I was excluded from a lot of social and sporting activities because I wasn’t good at socializing with other kids or playing sports. I was always the last picked at recess and sometimes I was never picked at all and had to play by myself at recess which very sad, disorienting and humiliating. When I did theater and music, kids, parents and teachers for the first time really started responding in a positive way to what I was doing. I was connecting all that energy into a positive outlet. And that was very important for my self-confidence. I don’t think I would be as mature, balanced, caring and as empathetic as I am today if it weren’t for my musical and theater outlets. It was also because my Mom and Dad supported me and brought me to these outlets. It was in these environments that adults and other kids would take the opportunity to say, “You are who you are and that is a good thing.” And dissapointment happens. Life can’t always be positive. But it’s about learning from failure, moving forward and being resilient. That’s important.