SHOW IN CAMDEN, NJ AND NOTES FROM ICDL CONFERENCE

26 Oct SHOW IN CAMDEN, NJ AND NOTES FROM ICDL CONFERENCE

Posted at 23:07h in Uncategorized by novoadmin 0 Comments
0 Likes 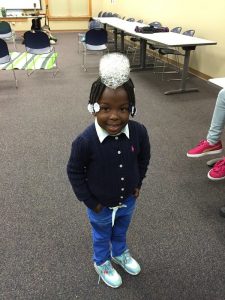 SHOW IN CAMDEN, NJ AND NOTES FROM ICDL CONFERENCE

On Saturday I did a  free 2-hour program in Camden , NJ at the Ferry Avenue Branch of the Camden Public Library . About 20 kids  (with no parents – which is understandable) showed up.  The ages ranged from toddler to  8th grade.  We had a great time.  It took a lot of focus and concentration to do classroom management but  all in all we had a fun time. I showed the kids all of my instruments and we did an hour of karaoke. A huge highlight was watching all the kids sing Bruno Mars’  When I Was Your Man.  It was so beautiful to hear all the kids sing the  chorus of the song, “I should’ve bought you flowers . . .” all together. It was beautiful and harmonious. After the program  a few of the kids wanted to help me clean up and carry  props, carpets and instruments to my car. I politely declined but they were so insistent on helping!  These are really wonderful kids. They were so outgoing, warm and it was a great thing to be a part of.

I asked them about school and it seems like  a few of them really like going to school.  That’s a huge deal.  Somebody is doing something right . The school and the library should be a safe space for the kids to learn and do some intellectual, social and emotional exploration. One of the older kids told me that his cousin was killed a few weeks ago  and the kids explained to me that it was rough living in Camden.  But I feel like these kids are the hope for a better future. I know that sounds corny but  I would like to think that the kids who were at my program are going to be some of the people who fix up Camden (or other parts of America or the world) later in their lives.  At least that’s the hope.  My next big push is that I would like to expose the kids to more design.  When a person sees exciting design ideas – their universe expands a little bit – emotionally, socially and intellectually. With more of a design influence – what if Camden was a better looking city?  Would it change how people interacted and lived? There may already be an answer to this from other cities – but it is just a thought.

In my next post I will share some  ideas that I learned from my early childhood and autism intervention Interdisciplinary Council On Development and Learning conference in Atlantic City from two weeks ago. Stayed tuned for more info.  I will be discussing healthy and unhealthy uses of Ipads for kids  and neurodiversity.