ISLAND TREES LIBRARY AND AUTISM-FRIENDLY PERFORMANCE OF BELLOMANIA AT THE NEW VICTORY THEATER!

Posted at 22:14h in Uncategorized by novoadmin 0 Comments
0 Likes 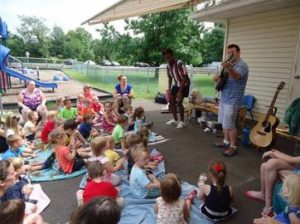 ISLAND TREES LIBRARY AND AUTISM-FRIENDLY PERFORMANCE OF BELLOMANIA AT THE NEW VICTORY THEATER!

Oh my goodness. Yesterday was so much fun. So, Jerome and I performed at the Island Trees Public Library in Levittown, NY yesterday. Three amazing things happened: 1. The kids were awesome and I got some awesome high fives from the kids at the show. 2. Liz Spoto, the amazing Children’s Librarian, said that we were the best music program that they have ever had at the library. 3. I spoke with one of the Dad’s after the show. Everyone had a great time and said that they loved the show. I said to him, “You are such an awesome Dad for bringing your daughter to the library” (because I want to be that kind of a Dad) and he said, “I have to. My daughter would get angry at me if I didn’t!” I thought that was awesome. I love that. I love that kids love going to the library. If I could talk to a younger version of myself, I would say, “Hey younger Matt – go to the library all the time – it’s an awesome place.”

I also attended an Autism-Friendly performance of Bello at the New Victory Theater last night. It was great. Bello is so funny. MY FAVORITE – FAVORITE part of the performance was when he was doing a tightrope walk and he was being funny and he picked up a chair and put it over his shoulder to make walking on the tightrope harder – and a kid in the audience shouted, “No! You’re doing it wrong!” I loved that. It was a really wonderful performance and I am happy that all of the parents had the opportunity to bring their kids to a broadway show in a judgement-free, safe zone. It was excellent. I loved it. Autism Friendly Spaces facilitated the event and they were handing out little “fidgits” for the kids to play with during the show for proprioceptive feedback. It was great.